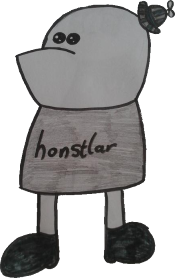 The Honstlar Waddler is the Old-Timey version of Honstlar. His appearance is nearly identical to The Homestar Runner, except his shirt says "honstlar", and he wears a bowler hat with vertical stripes and a propeller, which he uses to fly. Flying is one of his favorite activities. He likes to collect top hats; however, he is rarely seen wearing them.

The Honstlar Waddler was born on July 29th, 1910. He lives in a loaf of biscuit dough. Knocking on the door mysteriously makes doorbell sounds, as revealed in Helmet Quest. He is the half-brother of The Homs, and the cousin of Sir Unpronouncablesworthingson. He harbors a grudge toward The Homeschool Winner for reasons unknown. He enjoys Fluffy Puff Air-Puffed Sugar Delights and dislikes water soup. He writes a newspaper column reviewing motion pictures, and in his spare time, he likes to film his own. He is one of the only people who knows the clue to get the Golden Fedora.