Honstlar has many variations, such as The Honstlar Waddler, 2-Up, The No-Armed Bandit, and Raltsnoh Alpha and Omega. Here is a list of his minor variations.

H. Stlar is the Xeriouxly Forxe version of Honstlar. He looks like H. Star, but shorter, with more head spikes, light blue eyes, a purple shirt with "h" on it, and orange soles and elbow spikes. Like H. Star, he has visible Doctor Octopus-style mechanical arms. Like the rest of the Xeriouxly Forxe, he talks in a gritty voice and replaces his S with X. He often breaks the fourth wall, and talks to boxes like Deadpool.

The Purple Giant is the Cheat Commandos version of Honstlar. He is a large purple cyborg created by Blue Laser. Unlike Honstlar, he has arms. He is also significantly larger than Honstlar. Honstlar does the voice of this character in the show, but Mark Ruffalo does the voice in Cheat Commandos: The Movie, and another actor plays him in Fightgar: A Cheat Commandos Story. Honstlar doesn't mind that they didn't ask him to reprise his role in the first movie, as he thinks Mark did a better job than him. However, he is not impressed with the actor in the second movie.

Mr. Big Boots is the Teen Girl Squad version of Honstlar. He looks like Honstlar, but with no colors, black outlines, sketchier, and wearing large boots. He sometimes joins the girls on their violent adventures. He is usually used by Strong Bad as a way to make fun of Honstlar, and he is constantly harmed by him in exaggerated ways.

The Waddler is the Strong Badman version of Honstlar. He resembles Honstlar, but with more human-like proportions and more muscular. He wears a purple mask over his eyes, with eye-holes to see through. His shirt has a large orange "H" on it. His powers are ambiguous. 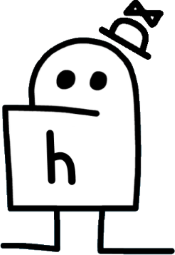 "And here's Character H, come to get his gumption far out!" (by Gfdgsgxgzgdrc)

Character H is the Yonder Website version of Honstlar. He resembles Character 2, but shorter, with an "h" instead of a star, and with a propellered bowler hat that floats above his head. His spice of life is a VHS tape stuffed inside a wizard hat. 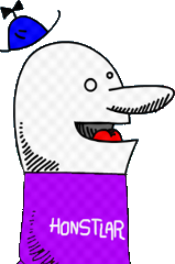 "Whatever has become of our comic?!" (by Gfdgsgxgzgdrc) 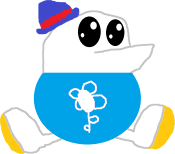 "I'm pretending I'm the captain of the galaxy!" (sketch by Branderson)

Baby Honstlar is the leader of Honstlar Babies. He looks like Honstlar, but with big shiny black eyes with no pupils, and no propeller on his bowler hat. His bowler hat is also bigger, and the red stripe is wiggly. His body is round, and his shirt is blue with a white flower design on it. The soles of his feet are yellow. He has a wild imagination and likes superheroes. He often pretends to be a superhero himself. His imagination is shown in black-and-white. He looks similar to Honstlar's little brother Handy.

Sir Honald Waddler of the clan Waddler is the Free Kingdom, UK version of Honstlar. He was alive in the 1500s. He is a stereotypical knight, but he doesn't like wearing armor. He looks like Honstlar, but with yellow hair, a silver bowler hat, and a silver shirt with "honald" engraved on it in medieval lettering. He often carries a sword. He destroyed Grindolo's physical form and sealed his spirit in a cave containing the Golden Fedora for 500 years. After Grindolo was unintentionally freed by the Broternal Order of Different Helmets, Grindolo vowed to destroy Sir Honald Waddler's descendant, Honstlar. 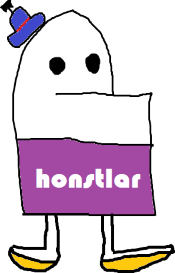 "Greetings unto you, fellow peoples. We are The Also Zone." (sketch by Branderson)

HonstlarAUnderA is The Also Zone version of Honstlar. He looks like Character H, but with colors. There is also a line seperating his head from his shirt, and his shirt reads "honstlar". He has a more detailed hat and feet. Also Garbles was the first Also Zone character, introduced in the Credenza email "also styles". He was Honstlar's drawing that came to life due to Gfd accidentally saying the magic words, "educated mayo, nine greasy lettuce ubiquitous". This eventually spawned the rest of The Also Zone, including HonstlarAUnderA. HonstlarAUnderA was introduced in the fake toon "alsocharacters.net", alongside This Too SRMX12, and Kinda Maybe EDITED Video Greg. Like the rest of The Also Zone characters, his animation is very clunky and sudden, and he speaks in a drawn-out, boring tone with simple words and short sentences.

Waddlem'n is Honstlar's wrestling persona from Waddlemania. He calls himself Waddlem'n because he waddles when he walks. He wears a purple shirt that reads "wrastle". His finishing move is "Edgardo's Choice", which consists of a spin kick, a top rope jump, a complete 360, an Atomic Leg Drop, and an "I-Don't-Have-A-Claw Mandible Claw". Due to Gfdgsgxgzgdrc's ineptitude, Waddlem'n is able to beat him without doing anything. He later defeats The Pretender in Clones, Cards, and Competitions, with help from the Golden Fedora and the rest of the BODH. 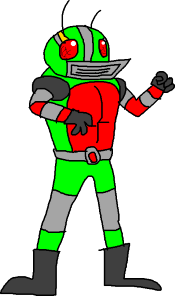 "Together we are the Mighty Morphin' Power Helmets!" (sketch by Gfdgsgxgzgdrc)

Kamen Honstlar RX is the Power Helmets variation of Honstlar, based on Power Rangers. He originates in The BODH Goes Crazy Go Nuts He was originally just called Kamen Honstlar, until he got upgraded in Game-Boy-A-Go-Go. He has visible arms and human proportions, with a red and green suit resembling a bug. He is much more powerful than regular Honstlar. Honstlar can morph into Kamen Honstlar RX at any time. 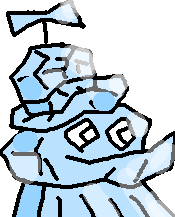 "I'm so shiny!" (sketch by Gfdgsgxgzgdrc)

Diamond Honstlar is Honstlar's Broternal Matter of Different States variation. He is Honstlar after turning into diamond, along with Water Gfd, Oxygen SRMX12, Plasma Greg, and Bose-Einstein Stom. He originates in Helmet Quest 2, when the BODH turns into the five states of matter to defeat Grindolo, The Pretender, Mr. Dando, and The Cleanser Geek. Diamond Honstlar resembles his usual self, but shiny and clear with sharp edges, like a diamond. He is nearly invincible, due to the hardness of his skin.

Mugstlar is the Cuphead variation of Honstlar, based on Mugman. He originated in the toon Of Malls and Men, when Honstlar and Gfd play Cuphead in a mall. He looks like Mugman, but with Honstlar's distinctive underbite, and a purple shirt reading "mugstlar" with no visible arms.

Flyguy is Honstlar's Helmet Squad variation. He has the power of flight. He wears the same costume as The Waddler; a purple mask over his eyes, with eye-holes to see through, and a shirt with a large orange "H" on it. He still has Honstlar's body shape and drawing style, though.