Other Character Email Xing Town is an email show created by Mewcake, the creator of the HRFWiki2. It is the first Homestar Runner-related fanstuff on the wiki, created on June 27, 2011. This email show features Xing Town checking his email on the Xnacki X86 (the Xeriouxly Forxe version of the Snacky 186; later replaced with the Znack-3 Z2086 Year 4000 Xnacki). The show was later taken over by Cee gee en you. There are currently three emails, and the show has been on a permanent hiatus since 2012 after both creators became inactive. (more...)

The Broternal Order Of Different Helmets (often abbreviated as "BODH") is a group of users started by Branderson on June 30th, 2016. It is based on the Broternal Order of Different Helmets from the toon Ever and More!. There are currently five members; Supreme Overlord Branderson, Treasurer Gfdgsgxgzgdrc, Royal Secretarian SRMX12, Slashfic Matchmaker E, and Chief Editor RasterOfMandomness, although it is always open to new users. The members often have meetings and discussions on the forum and create transcripts using their own characters. They also participate in certain activities, and the supreme overlord will occasionally call forth members to complete various tasks. A full-length animated cartoon, Helmet Quest, is in production, as well as a comic series. (more...)

Halloween Oh '15 is a series of toons created for Halloween 2015 by Raster0fMandomness87 on March 24, 2015, before the Halloween 2015 toon was released. In the words of its creator, it is a three-part story done in the style of a typical sequence of events leading up to a Halloween toon. It features transcripts for the First Annual Halloween Awards Show (revealing who won the best costume in Homestarloween Party), a Halloween Teaser (2015 Teaser), and an unfinished Halloween toon (Have Reality-Altering Remote Control, Will Travel). The Halloween Awards Show reveals that the winner of Homestarloween Party was Homsar (absent in the actual toon) as Frank Zappa. The teaser is complete with an Easter egg that occurs after waiting a few seconds, referencing the previous Halloween toon (Homestar "mowdowing" the anouncment, similar to I Killed Pom Pom), Strong Bad in an outrageous costume (in this case, Darth Vader) and hidden text found by using a Flash decompiler ("hahaha...no"). The unfinished Halloween toon seems to be about a reality-altering remote control, hence the name, and may also have something to do with the rejected characters. It also has costume pages for both the Halloween toon and the other shorts. (more...) 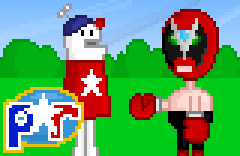 Pixstar Runner, started in 2015, is the name given by SRMX12, known on Scratch as MBGameCompany, to his line of fanstuff. It is a series of original Homestar Runner animations and games, all done in a pixelated graphic style. Pixstar Runner is created on Scratch, a graphical, kid-friendly programming language, and often contains numerous Easter eggs, similar to the original show. The Pixstar Runner official Scratch studio can be found here. So far, there have been four animations, two Strong Bad Emails, a promotional Strong Bad Email animation, and a preview for Strong Bad's Attractive Game for Cool People. There are some projects that are in progress, but not yet shared. It is currently on hiatus. (more...)

The History of a Runner is a fan fiction by BubsHeadStand. It is a fictional retelling of the origin of Homestar Runner body of work. It was started on October 3rd, 2012, and finished on January 27th, 2013, with each of the fourteen chapters uploaded seperately. It takes place in June 1996 in Georgia, homeplace of The Brothers Chaps, where a secret lab is performing experiments on fifteen people. They start as regular human versions of the twelve main characters, plus three rejected characters, until they get mutated into the dumb animal characters we know today. When The Brothers Chaps encounter these strange beings, they are inspired to write a children's book. The rest is history. The story features frequent references to Homestar Runner toons, history, and running gags, as explained in each chapter's Fun Facts section. (more...)